The Criminal Sale Of Safes & Cabinets Containing Asbestos In Ireland

After our initial investigation in late 2019 into the issue of asbestos in pre-2000 safes, the Law Society Gazette published our preliminary findings in July 2019, after which the Health And Safety Authority issued a public notice in October 2019 warning consumers of the serious risk to health posed by these units.

This prompted a similar investigation in Europe which resulted in the topic being placed at the top of the agenda for the annual European Security System Association conference held in Frankfurt in November 2019.

Falko Adomat, Project Manager at the European Security Systems Association and Secretary of the European Standardisation Committee for Safes And Fire Resistant Storage Units (CEN/TC 263) gave an informative seminar on hazardous substances including asbestos that can be found in pre-2005 safes and the serious danger they pose to anyone working with them.

Asbestos was banned in the European Union in 2005. However, thanks to the European Union's free movement of goods and services, safes and cabinets contaminated with asbestos could and continue to move across the Eurozone. A fact that seems to have gone almost unmentioned in the second-hand industry until now.

According to the seminar delivered by Mr. Adomat to an international audience, asbestos was still used in over 80% of data safe production into the 1980’s and even into the 90’s.

If you have a pre-2005, an uncertified or unmarked safe or cabinet, particularly one you bought second-hand, have it checked for possible asbestos contamination as soon as possible.

Asbestos is generally not covered by insurance policies, which leaves most businesses directly liable for asbestos exposure in the workplace.

The issue of asbestos in safes, document and filing cabinets has been swept under the carpet by vested interests in the safe supply industry in Ireland and the UK for at the expense of very serious health repercussions for many buyers and users of uncertified safes and cabinets.

Safe suppliers and private sellers in Ireland are still supplying and openly advertising safes and cabinets that have been flagged by the HSA as presumed to contain asbestos and are using a variety of official looking documents, unaccredited certifications and quazi-credentials to sell them.

Safes and fire-resistant cabinets containing asbestos are common on the second-hand market in Ireland and are present in countless businesses, office, banks and Credit Unions across the country. Most of these units are being used by unsuspecting office staff who are risking exposure to asbestos fibres on a daily basis.

Click below to view Law Society article or HSA notice: 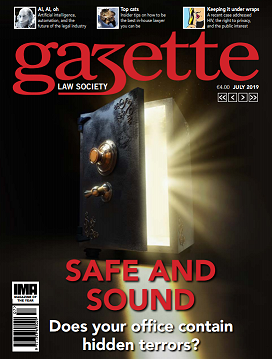 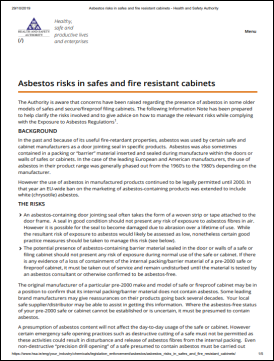