"Bear in mind the whole facility was designed and constructed by Lloyd’s of London".

On the 2nd of March 2021, during Covid-19 lockdown, Certified Safes Ireland™ managing director Alan Donohoe Redd wrote to the editor of the Irish Times, Paul O’Neill in relation to recent Irish Times articles on Seamus Fahy and Merrion Vaults, drawing his attention to some significant discrepancies with security and certification claims made by Fahy in relation to his Dublin based operation, some of which had been published by the Irish Times.

Coverage of Merrion Vaults by the Irish Times, particularly during Covid-19 lockdown of 2020 to 2021 had been quite remarkable as it saw the publication on at least two separate occasions of a false narrative that would clearly benefit the business if true, namely, that household burglary was rising. The truth is a substantial 44% decrease in burglaries had been recorded by the CSO at that time, information that was readily available to any journalist interested. One article, by Barry O’ Halloran, even made the fantastical claim that Lloyd’s of London “approved” security at all Merrion Vaults branches.

On examining the issue in more depth, in particular statements that had been made by Seamus Fahy regarding security, certification and "approval" at Merrion Vaults since 2014, Certified Safes Ireland™ discovered serious discrepancies with many of Merrion's claims which, unsurprisingly, due to their dramatic nature, had attracted coverage from multiple publications over the years, including insurance and business publications as well as radio interviews.

In relation to what now seemed like a long-term pattern of behaviour on behalf of Merrion Vaults, Certified Safes Ireland™ highlighted the following examples to Mr O’Neill in a communication marked private:

1. The Claim That Merrion Vaults Was Tested And Certified By VDS For Burglary And Fire Resistance Was Never True.

Merrion’s claim, first made in 2014, that their vault was “a graded VDS tested vault, unlike other bank vaults” in relation to their address at Hospitality House on Cumberland Street has been quite categorically refuted by Frederic Prudent head of the laboratory of mechanical security for VdS Schadenverhütung GmbH. The very same VDS that Merrion Vaults claimed had "tested" their "vault".

To be clear, the claim to VdS testing and certification is a legal claim to accredited burglary resistance and in the case of Merrion, also fire resistance under EU regulation 765/2008, the legal basis of accreditation for the certification (ISO/IEC 17065). This is the regulatory basis on which recommend insurance ratings for certified safes and strongrooms in Europe are based. In the case of Merrion Vaults the business has never had a VdS accredited certified strongroom.

2. Lloyd’s Of London Are Not In The Design And Construction Business.

In 2015 Seamus Fahy said this to Valerie Cox on RTE daytime radio in relation to Merrion Vaults, “bear in mind the whole facility was designed and constructed by Lloyd’s of London”. When asked about security in general by BBC Radio in 2017 Mr Fahy said, “We’re insured with Lloyd’s of London and before we even spec the vault, we sit down with them, and they tell us what type of specification they require.” The interviewers sounded impressed, but when we sent audio clips of these statements to a senior Lloyd’s representative who happens to be a connection of ours, we were promptly informed that the issue had been “escalated to London".

Lloyd’s of London is not an insurance company but an insurance market where syndicates operate to cover risks. To say “we’re insured with Lloyd’s of London” is technically incorrect but somewhat understandable, however, to claim that Lloyd’s are in the design and construction business, meeting up with Seamus Fahy at his convenience would be comically ludicrous had the claim not been taken seriously by RTE and others in the media.

Just three weeks after we wrote confidentially to Mr O’Neill, the claim to VdS certified burglary and fire resistance, which had been displayed on Merrion Vaults website since 2014, was removed. A coincidence so remarkable that we wrote to Mr O’Neill again on the 30th of March 2021 and asked if the Times had discussed the content of our private email, to which we had received no reply, with Merrion Vaults. We finally received a reply from the Times on the 6th of April 2021, acknowledging receipt of our email, telling us the contents had been noted, but with no answer to our question forthcoming.

As our correspondence with the Irish Times regarding false claims published by the newspaper on the subject of Merrion Vaults did not seem to illicit concern from it's editor, we wrote again to the Times on the 20th of April 2021, but this time regarding the Irish Times most recent “article” on Merrion Vaults, published in January 2021, and this time we did so via the Office of the Press Ombudsman.

The article in question, published by the Irish Times in January 2021 is the article by Barry O’ Halloran, which we already mentioned, that had made the fantastical claim that Lloyd’s of London “approved” security at all Merrion Vaults branches and the equally false claim that burglaries were on the rise at that time, contradicting both CSO statistics and An Garda Síochána.

This elicited a strange reply from Mr O’Neill. In defence of this Irish Times article which quoted Seamus Fahy saying, "research shows a rise in burglaries”, Mr O’Neill said, “So far in 2021 five pieces have been published (by the Irish Times) that mention the pandemic related drop in burglaries”. So, according to Mr O'Neill, it appears the Irish Times were fully aware that Mr Fahy’s claims regarding burglary figures were false, but nevertheless published a narrative to the contrary regarding Merrion Vaults on at least two separate occasions.

Mr O’Neill’s statement pointing to other Irish Times articles that reflected the unprecedented drop in burglaries at that time invites an obvious question:

Looking at one particular story from the The Irish Times published on April 23rd 2020, on the subject of Merrion Vaults and a story from The Independent published on the same day, the contrast in headlines is striking.

The Press Ombudsman Upholds Our Complaint.

The Press Ombudsman officially upholding our complaint regarding the Times coverage of Merrion Vaults on Monday 14th of June 2021 commented the following:

Breach of Principle 1 − Truth and Accuracy (Press code of practice)

The defence put forward by the editor that the newspaper had published around the same period a number of articles informing readers that the level of burglaries had declined during the covid lock-down is not persuasive. Also, not persuasive is the defence put forward by the editor that Lloyd’s of London had not complained about any inaccuracy in the article. When the newspaper’s attention was drawn to the article’s claims about Lloyd’s it deleted the reference online. As with the issue of the levels of burglaries this was not a sufficient response to avoid breaching Principle 1.” 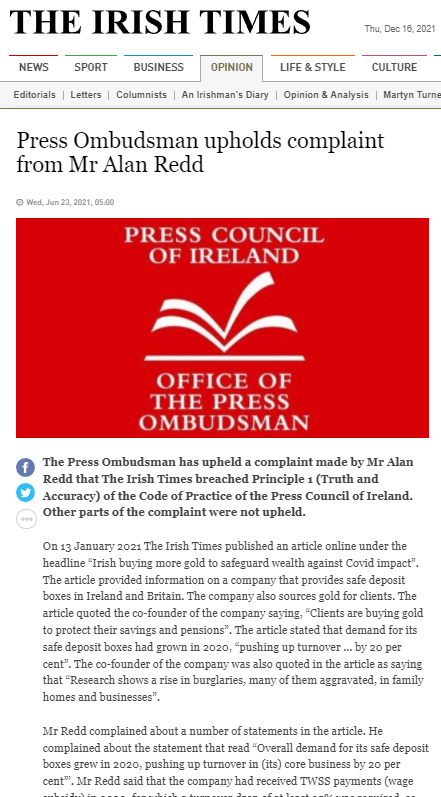 Merrion’s “Friends in the Irish Times”:

Of course, the retraction and editing of many of the claims related to Merrion Vaults security by both Merrion Vaults and the Irish Times does not change the fact that over eight years they were broadcast and published Nationwide, while the retraction of the same dramatic and sometimes fantastical claims has garnered no coverage apart from our upheld complaint to the Press Ombudsman which amazingly omitted naming either Merrion Vaults or Certified Safes Ireland™ as the complainant.

Clearly many in the media would rather not admit their mistakes even though it is clear that a spectacular failure in due diligence must have occurred for such an extraordinary narrative to be sustained by Merrion Vaults for so long without some basic and one would think obvious questions being asked.