We contacted Certified Safes Ireland regarding our safes to investigate whether there was any issue with asbestos. Alan Redd was extremely helpful, knowledgeable, professional and responsive. I would have no hesitation in recommending this...
Ger Gray (Google Review)
Efficient, excellent service
Elle Woods (Google Review)
Alan from Certified Safes Ireland was extremely helpful to me. I had bought a house with a safe installed and he was very helpful in explaining the type of safe, how to use without asking for any payment. I would highly recommend. Thanks for the...
Mark Duffy (Google Review)
Alan was extremely helpful and informative. Appreciate your quick response and support. Audrey Enable Ireland Tallaght Services.
John O Connor (Google Review)
Extremely knowledgeable within their security fields and will meet the requirements of the assessed risks. An excellent service, easy to deal with and highly recommended.
Fabian Doyle (Google Review)
My brother and I ordered 2 Wertheim lap top safes. They were delivered right on time and we fitted them ourselves. They are heavy (85kg) but with 2 people easy to fit. We are very happy with them-thanks Alan for your help.
Dan Chavasse (Google Review)
We used Certified Safes to move two large commercial safes in an office block. Previous experience with another company suggested this would be a difficult task, however Alan assured us otherwise and was proven right. 20 minutes or thereabouts...
David Concannon (Google Review)
Excellent service. Bought my safe on-line. It was what they said it was. Excellent product and after sales service with regard to installation and programming. I would highly recommend this company.
Declan Smith (Google Review)
Certified Safes International Ltd provided specifications for E.U. certified safes matched with U.S. Federal safe locks for use on air bases across Europe. Their advice in this matter has been invaluable and of enormous benefit to the USAF.
McCarthy, Nicholas J CTR GB USAF
Excellent service. Alan went out of his way to help and was very efficient, would highly recommend!
Beeftro Dundrum (Google Review)

Jewellery, watches, laptops, passports, personal data and cash are all prime targets for home burglars, yet these are the kinds of easily disposable assets that you will always want to have close to hand. The obvious answer to mitigating this risk is a safe and an alarm system. The European standard of burglary resistance for safes, EN1143-1, and EN50131 intruder alarm system standard are benchmarks that provide both insurer and client with standards that are clearly defined, backed by accredited testing and independent accredited certification. However, while statutory regulation exists governing the intruder alarm industry, no similar regulation is in place for the safe industry and the unpalatable reality is that most safes bearing badges that claim compliance with the European burglary resistance standard EN1143-1, do so without any accredited burglary resistance testing or certification whatsoever.

The Legal Situation:
Technically there is nothing illegal about stating that a particular safe has been manufactured in accordance with European standard EN1143-1. This is simply a statement of opinion, so it is of primary importance that when it is claimed that a safe is certified to EN1143-1 we always ask the question, certified by who?

"70% of safes tested by accredited European testing labs fail on the first attempt, so the implications of accepting unaccredited claims of EN1143-1 burglary resistance are obvious."

As several safe suppliers in Ireland have been convicted of fraud with at least one having spent time in jail but still operating, heightened due diligence is always required when choosing a safe supplier or reviewing the details of a particular home safe. Fortunately, the European system of accredited testing and certification of safes, while not enforced through statutory regulation yet, provides a template of easy-to-follow due diligence to ensure your interests are protected long-term.

EU Parliament regulation 765/2008 created the system that provides the legal basis of accreditation for the certification of safes to European standard EN1143-1. This system is backed by regular auditing and market surveillance and is verifiable, proof of standard for litigation purposes. A safe with properly accredited European certification will display at least one stamped metal certification plate on the inside of the door. This will always be a stamped metal plate, never a sticker.

As is the case with Burglary resistance, technically, there is nothing illegal about stating that a particular safe has a certain fire resistance. This is simply a statement of opinion and may often be based on a manufacturer test or a non-European test such as the NT Fire 017 conformity test for Nordic countries. For G.D.P.R., litigation and for general peace of mind we always recommend insisting on regularly audited European fire certification standards which have a basis in European law as a proof of standard such as EN50131 or EN1047-1. 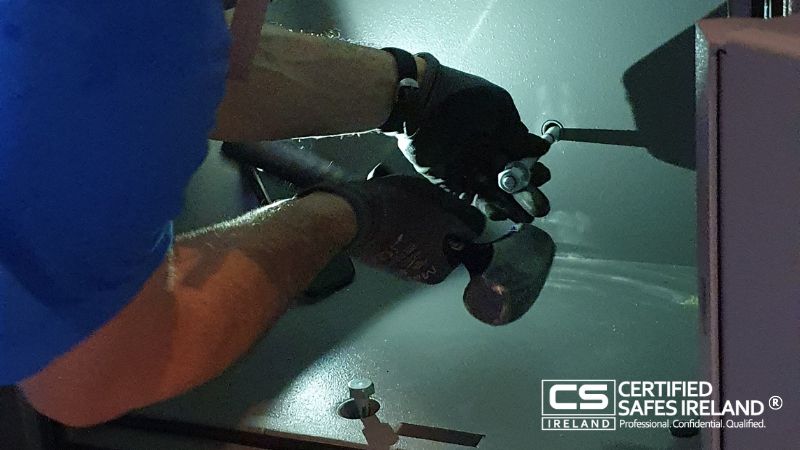 EN1143-1 certification is void for a safe that has not been anchored but some safe installers idea of what constitutes “anchoring” can differ wildly from others. The benchmark for the correct anchoring of a certified safe is a replication of the laboratory test anchoring force. This means an anchor designed to achieve a holding force of 50kN (5.089 tons) for a safe up to grade III and 100kN (11.24 tons) over that grade. Holding forces that rule out removing a safe under most circumstances. All certified safes come with a bolt suitable for achieving these anchoring forces, so it is really down to the installer of the safe being familiar with the correct anchoring method. As with certification, always ask for a certificate of anchorage with the anchoring force the installation was designed to achieve indicated on the document.

Most properly certified safes are prepared for alarm integration so will have seismic sensor and door contact mounts ready to receive alarm signalling devices. It is also important to realise that most certified digital safe locks have duress signalling capability built in that can provide a client with the opportunity to send a silent panic signal directly from a safe’s keypad. Most people are familiar with duress or panic alarm signalling but seismic sensors are far more potent devices for reducing risk. Faced with a properly anchored certified safe, a burglar has to deal with what, for all practical purposes is an immovable object. The only recourse being heavy-duty power tools or a heat attack, such as an oxyacetylene torch. Both low cost and easy to install, seismic sensors are always on, even if the alarm system is switched off. These sensors will detect prising, cutting, drilling and heat attacks, while not being triggered by normal use of the safe. This is why seismic sensors are the most powerful risk reducing addition to any home safe and why a reputable safe supplier needs to be familiar with them.

As is the case with certification and anchoring, ask for documentation confirming that any alarm integration devices used to monitor a safe are certified to alarm standard EN50131.

The Private Security Authority licenses alarm installation in the Republic of Ireland on the basis on European standard EN50131. The standard requires all components to be certified compliant with the standard. An uncertified alarm signalling device installed as part of the system voids compliance and even leaves both the installer and the client open to prosecution. An Garda Síochána will not respond to an unlicensed alarm system or an unverified alarm activation. To trigger a response from An Garda Síochána a monitoring station must verify that an alarm is genuine and not a malfunction. This can be done in a number of ways, but in the context of a safe we need two sensor activations. As most safes come with multiple sensor mounts, this is a straightforward install for a qualified and licensed alarm installer. 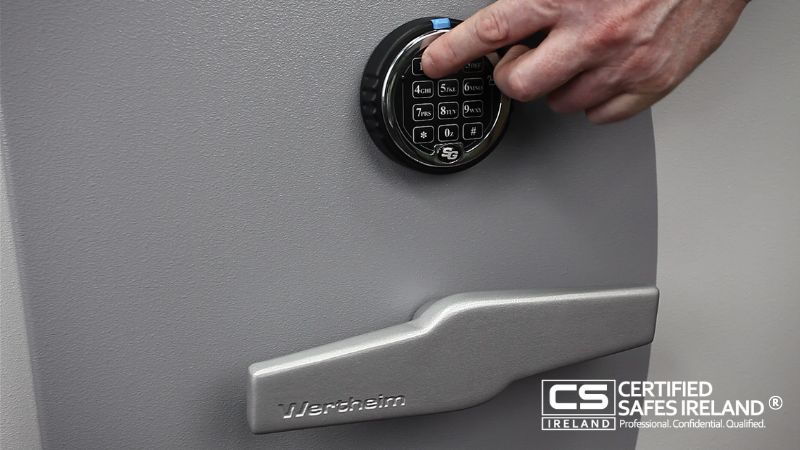 It has always been possible to open a mechanically locked safe by manipulation leaving no trace of entry. Both the knowledge and tools to defeat most mechanical safes locks are very easily obtained and of course keys for safes are also easily copied, even from a photograph. In comparison, the penalty lockout feature of a certified digital safe lock shuts a safe lock down for ten minutes if four incorrect codes are entered in a row. With the ability to interface with duress and alarm modules, unavailable for a mechanical lock, mechanical access control for a safe has been phased out in most of Europe. The Irish Safes Ratings Group (ISRG) and An Garda Síochána recommend certified digital safe locking over mechanical for security reasons.

Inspecting What You Expect